This single-day, four-hour clinic held @ Junction Place Sportsplex will have one, and only one, focus: developing the skill set of 8-16 year old baseball players.

Participants will be grouped based on age and skill level

Participants will rotate through the following stations/sub-stations below!

Technical Hitting work with stations broken into:
- "Teaching Tees" (diving into the value of hitting off of a batting tee and how it is the key to individual development)
- "See It- Smash It" (live hitting stations with personalized instruction)

Technical Pitching work with stations broken into:
- "Wind & Grind: How Mechanics and Balance Bolster Performance"
- "Stretch Test: How to Pitch and Manage in a Jam"

PUT IN THE WORK NOW

LTG Stars Baseball was established in 2015, as a one (1) team organization with 12 kids from a one square mile radius. This special group of kids took our program to a 9U Grand Slam World Series Championship in just a 1-1/2 year time frame. Some of those same kids are still a major part of our showcase program as 2024 and 2025 graduates. In that same time frame we grew to a total of 8 teams ranging from 8 years old to 12 years old.

Our showcase baseball program was established from one simple formula. “Do Not let financials be the reason your kid does not play in front of people who can help change their lives, or career”.

During the Fall of 2019 we became an affiliate of Banditos Baseball Tomball, Tx. The Banditos Organization is one of the most recognizable organizations in the showcase world of baseball. We made this decision because we want to provide a service to all players for a very affordable price and strictly for the advancement of the player. This move was also made to showcase our players in front of top major league teams, power five Division I programs, and have a great established avenue for all levels of collegiate ball.

We have made remarkable strides and currently from the age of 14 to 18 years old we have seven (7) teams and 95 high school players. On the youth side we currently have three (3) teams from the age of 10 to 13 years old. Our program has made tremendous strides in becoming the staple front for all players in the state of Louisiana with one goal in mind. “Prove everyone wrong, One Player at a Time”. 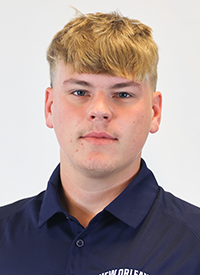 Trey Usey commitmented to the University of New Orleans D1 baseball program. Trey played on the highly talented 2016 Eastbank LL state runner-up team. Trey was a solid all around player for us as he was one of the top pitchers, hitters and infielders. Trey is currently a freshmen Fisher High School.

2022 (Redshirt Sophomore): Made nine appearances on the mound with five starts before a season-ending injury… Went 4-2 with a team-high 3.66 earned run average, striking out 26 batters over 32.0 innings of work… Made season debut at California Baptist and went 1.1 innings of relief without allowing an earned run (2/19)… Gave up just two runs over 5.1 innings in game one loss to Saint Peter’s (2/26)… Threw 2.1 scoreless innings against Cornell where he struck out four (3/6)… Picked up the win in game one against Albany, allowing just two runs over 4.0 innings of relief (3/11)… Went 5.2 innings and gave up just four earned runs while striking out six in game one victory over Delaware State (3/19)… Took the loss at Norfolk State, allowing just one run on two hits with four strikeouts in 3.1 innings in game one (3/26)… Received the win in his final two outings, starting with a three run outing against Maryland Eastern Shore (4/2)… Closed the season by throwing four scoreless innings where he allowed just two hits and struck out four in game two against Norfolk State (4/9).

2020 (Freshman): 2x MEAC Rookie of the Week… Made five appearances with two starts on the mound, going 2-2 with a 4.15 ERA while striking out 15 batters in 17.1 innings… Tossed 4.2 innings of relief in collegiate debut, allowing five earned runs with two strikeouts while retiring eight of his first nine batters… Picked up the win in relief at Richmond, striking out three without allowing a hit in 2.1 innings to earn MEAC Rookie of the Week honors… In first career start, threw 6.0 innings without allowing an earned run while giving up just five hits and fanning eight to earn the win and win another Rookie of the Week award… Allowed three earned runs with a pair of strikeouts in 3.2 innings at Mount St. Mary’s.

Questions? Comments? We always appreciate feedback so that we can continue to constantly improve our programs and facilities.